It’s rainy and gloomy again, so I have the mood and some time to write.

2 days ago it was exactly 1 year since I began living here in Rome, Italy.

To begin with, I can say, that surprisingly ALL the stereotypes  proved to be true:

If you want to know more, here you go:

I wouldn’t say they are very high, at least in Rome.

The food is cheap if you buy it in the supermarkets like Eurospin. For example, yesterday I bought a huge bag full of stuff just for 10€.

If you want to go out, I’d say it’s affordable, too, but it depends where you go of course. Normal price for a cocktail would be from 6 to 9 euros, beers are from 4 to 6 in bars, but you can always get it much cheaper in corner shops.:) There are cheap places with shots for 1 euro and expensive ones with an entrance for 30, so it really depends.

There is one sad exception – prices for accommodation in Rome are extremely high! It is the same for all big cities Milano, Torino etc. But in Rome, it’s even worse because the city is so ancient that it’s possible to build something new only in the outskirts of Rome. I pay 400 € for a room not very central, but close to my Uni. Plus “spese”- all the bills, that are from 40 to 100 euros monthly depending on the season. And I am considered to be very lucky because my room is very big. Usually you can find something much smaller for the same money.

I remember, when I’ve just arrived, one Italian guy was talking to me, and I noticed that he has his chest shaved. For me it was quite shocking, because none of the guys in Russia would do it – they all try to have this brutal handsomeness, let’s say.

And they like women. I mean, they really DO like women! They will not hide it, they are proud of it! Firstly, it was hard for me to get used to all that “Ciao, bella/ Buongiorno, signorina” and cars honking all around, but now it’s fine ;). And it does not depend on the age – old grandpas gathering around near a local coffee bar every day trying to give you some compliments or some young 5 year old Italian kid touching your legs in the queue – it doesn’t matter, it’s in their blood, what can you do!:)

Amazing, comparing to Russia, obviously!;) It’s not like it is not hot in Russia, it’s more like it’s warm here. And, even though it’s gloomy now and it was even SNOWING a bit last winter here (when everyone got absolutely crazy), it’s still a Mediterranean climate, so it’s hot. In August it gets that dry, that there is no more grass in the city at all. So, maybe not the best month to visit the eternal city.

The sea is just 1 hour away by public transport, so I am enjoying the weather, it’s great!

Here, us, me and Italians, we have some misunderstandings, – I don’t understand the fun of being “mammone“- mamma’s boy. It is really common in Italy to stay in the family until you get married, and they get married quite late – around 35 years old. It is totally normal here to be 29-30 and still not to finish a university. They take their time with exams, they re-pass it 5 times or don’t even try to pass it at all. Well, I have to agree that the educational system is harder here compared to the Russian one, but come on, till 30?…

In Russia, we finish 22-23, and it’s such a shame if you didn’t do it on time. During the university time, almost everyone already works a qualified job, so right after that (if not before) we usually are completely independent from our parents. Here, almost no one works at that age, it’s weird for me.

Like in Russia, it’s quite rare to meet someone random on the street or a store who speaks good English. They prefer foreigners to learn their language, so that’s what I am doing now.  🙂 It appeared to be not that easy, by the way, as they have so many grammar rules. But I am getting there! I think one of the main reasons of the lack of that skill is that all their movies are dubbed. There are maybe just couple of (overpriced) cinemas in Rome that show movies in original language with subtitles. And another reason is probably the level of the language education at school.

UPDATE: Are you looking for a beautiful holiday spot? Take a look at our new article on best places to stay in Amalfi Coast, Italy!

Certainly, in this post, I wrote about my opinion only about the majority of the people. Of course, there are a lot of exceptions – for example, I have lots of friends who are very active, they go to internships and speak very good English. So it’s kind of hard to classify, but I did it in my way! 🙂

There is also a noticeable difference in the character and mentality throughout different parts of Italy. The North is more serious and business-oriented, the South is a mess, but a “dolce far niente” paradise, and the Central part is something in between the two of them. They have different dialects everywhere. So, yes, they are different and it’s good in this way. 🙂

Have a question/something to say? Let me know in comments below, I love hearing from my readers! 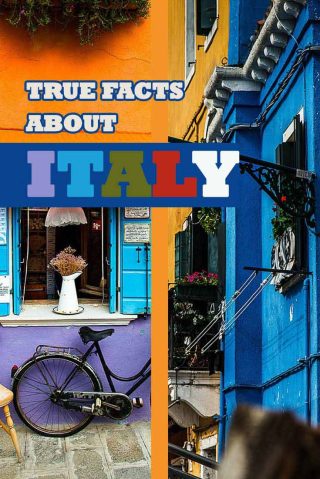 Yulia is originally Russian but truly is a world citizen in the heart. She was traveling around the world for over 4 years now. Her blog MissTourist.com is created with the purpose to inspire people to travel more and to share her advice on how to travel "smart".