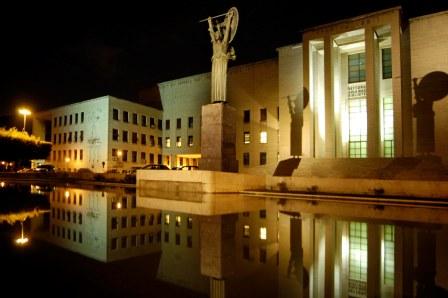 Here are my impressions about my studies in Rome.

My university is called La Sapienza  – Università di Roma (Wisdom in translation). They say it’s the biggest university in Europe – it was found in 1303 and has campuses all over the city and around 150 000 students. Huge !

Coming here and getting used to the how things work (almost nohow) was hard in the beginning. My Master program in English was the first experience ever for them, so, I was aware it won’t work perfectly. But it would be really nice if they would at least know themselves this program exists… So, let’s start from

So, I can see that La Sapienza is very interested to attract students from all over the world, but first they have to adapt all their facilities for the comfortable use of a foreign student. There should be some orientation before the beginning of semester; staff should speak English, at least in libraries, enrollment services and so on. There are lots of Erasmus student, but they are mostly Spanish, so it is very easy for them to understand Italian, and they don’t have to register in Infostud, be enrolled and other stuff. On some point it is good for me, because I was practicing my Italian, but I am sure most of fresh comers would be stressed to do that.

Even though the organizational aspect is pretty weak, there are a lot of benefits you can enjoy by being a student in my uni, but they are more about activities, not studies.

So, because it is big it is a snail-paced bureaucratic machine, it is really hard to change the system if you need it. But, in the same time, it’s fun, it has lots of services provided to students, which you would receive in other universities for big money only.

Except studying, I am, of course, discovering the eternal city everyday. It is truly fascinating how much fun and interesting stuff you can do in Rome. I even wrote 2 blogposts about it, you can read them here and here!