St. Peter’s Dome in Vatican – How To Skip the Lines and Climb to the Top 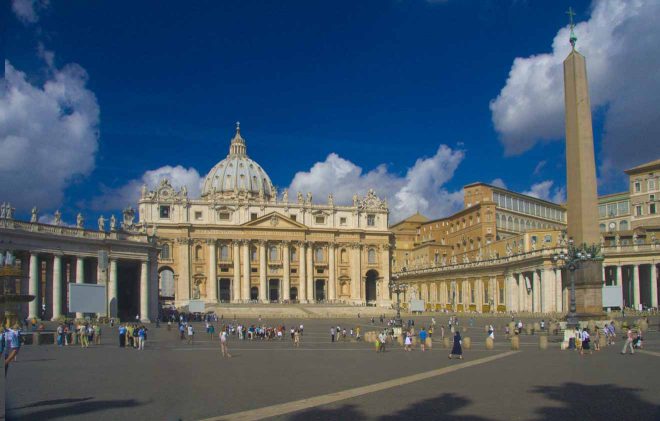 During the two years I spent in Rome, I tried to soak up as much culture and beauty as I could. Besides the world-famous Colosseum and Vatican Museums, another must-see in the city is the beautiful view from the top of St. Peter’s Dome (the “cupola”)!

UPDATE: Find more about the best places to stay in Rome by checking out my new article, 6 Best Neighborhoods to Stay in Rome.

In my opinion, St. Peter’s Basilica, also known as Basilica San Pietro in Italian, is one of the most beautiful churches in the world! It is located in Vatican City, which is recognized as a World Heritage Site by UNESCO.

Oh, and by the way, did you know that St Peter’s in Rome is the largest church in the entire world? And the top of its dome qualifies as the second largest building in Rome!

While the beautiful and historic interior of the Basilica is worth seeing, the church also offers another fantastic and astonishing experience – climbing to the top of St. Peter’s Dome! From the top of the dome you will get to see the city from a completely new perspective. 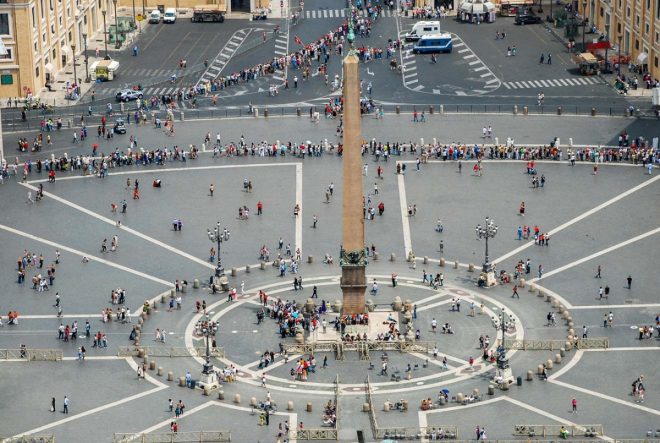 As you can imagine, just like many other attractions in Rome, St. Peter’s Dome can get veeery crowded. The average waiting time to climb the Dome of St Peters is between 60 to 90 minutes. Believe it or not, I only got to climb it once during all the time I spent in Rome and that is because I was terrified of those long lines!

You are now probably wondering if it’s worth it to waste at least 60 minutes of your time waiting in line, right? Thing is, you might not have to! Don’t worry, I did my research and found two secret tricks on how to avoid those long lines!

Here is how to get to the top of the Dome without crowds: 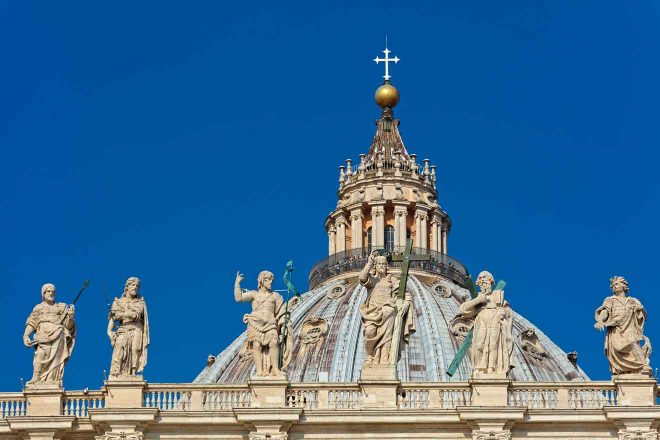 Although there is no direct skip the line access to the St Peter’s Basilica Dome, I was able to find a tour that combines skip-the-line entrance to the Basilica with special access to both the Crypt and the Dome!

This option is available early during the day and that makes it a perfect option for avoiding all the crowds. When you arrive at the Basilica, you will be able to take a special elevator that will take you up to the first terrace of the dome. Here, you will see the gorgeous mosaic and after you climb the remaining stairs you will admire the amazing view over the entire Vatican Square!

After climbing the Dome you will also get a guided tour of the Basilica, ending with an unforgettable visit to the papal crypt.

PRICE: 49€ per person depending on the season and active promos 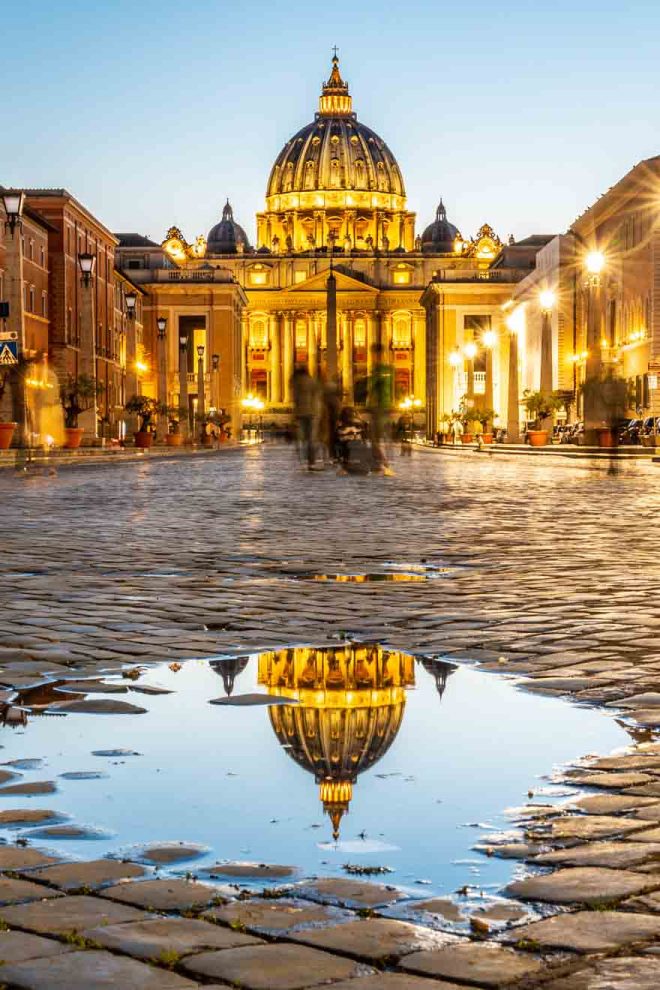 Even though the Basilica is open beginning at 7:00 AM, the entrance to the Dome is only open from 8:00 AM on.

If you would rather experience the climb on your own without spending money on a guided tour, you could try to be one of the first in line to climb the dome in the morning!

There are two options to select from when deciding to climb the Vatican Dome:

Feel free to choose whichever option you think is best for you; either way you will be in awe when you get to experience the spectacular view inside the dome! In both cases you will have to climb some stairs, so make sure you wear comfortable shoes!

Here you can find the updated opening times and entrance prices for the Cupola (sorry, the information on the official website is only available in Italian for now).

NOTE: There is no option to buy your tickets for St. Peter’s Dome online yet; you can only purchase them at the ticket kiosk on the spot. 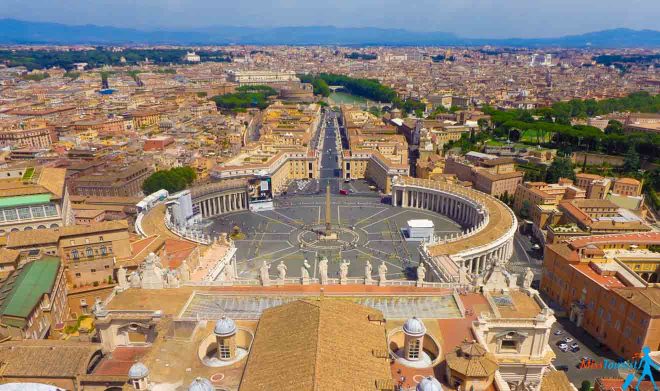 Now that you know how to avoid the crazy lines at the entrance, I would like to give you a bit of extra information that you may need for your visit! I have tried to answer the most common FAQs about this attraction below:

Why is the Dome so special?

Speaking of the Basilica, it is considered to be one of the holiest sites of Christianity. The inside is full of incredible art pieces including a bronze statue of Saint Peter that dates back to the 1300’s, the famous “Pieta” by Michelangelo and the throne of St Peter. The church also houses the burial site of St. Peter and the tomb of John Paul II.

The Basilica, together with its beautiful Dome, is honestly one of my favorite attractions in Rome because it offers a unique experience that is hard to come by anywhere else in the world!

How Can I Get to St Peter’s Cathedral in Rome?

There are many different ways to get to the Vatican Cathedral. Below I will tell you about the most popular options: 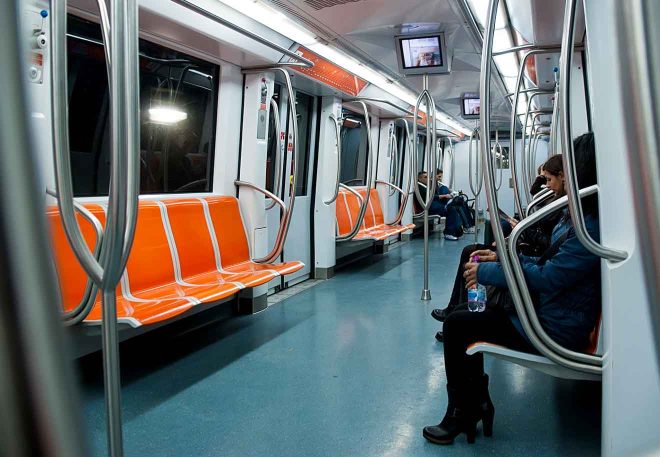 The closest metro station to the Basilica is the Ottaviana-St Pietro, located right at the entrance to Vatican City. The metro stops very often, around every 5 minutes. From the station, you will only have a 5-minute walk to the Basilica. One metro ride costs 1.50€ and the ticket can be used on buses as well for up to 100 minutes.

You can buy metro tickets from various points all over the city such as bars, metro stations, tobacco shops, and bus stops. You can read more about the passes and public transportation in Rome on their official website here.

There are maaaany bus options that you can choose from in order to reach the Roman dome. For example, from the Termini train station you can take bus no. 40 or 64. Bus number 81 will take you to Vatican City from the Colosseum. A single-ride bus ticket costs 1.50€.

Yes, you can also get to the Basilica by train! The closest train station to Vatican City is St. Pietro. Once you arrive at the station it is a short 10-minute walk to St. Peter’s Basilica. A standard train ticket also costs 1.50€.

Just like in many other capital cities around the world, taxis can be used for transportation in Rome as well. They may be the most expensive option to get around the city, but in order to find out an approximate ride price to get from your desired location to St Peter’s Dome, I recommend using this taxi fare calculator.

For example, a taxi from Villa Borghese to the Basilica can be around 10€. On the other hand, a taxi ride from the Colosseum would cost around 9€.

You can select whichever means of transportation you prefer. 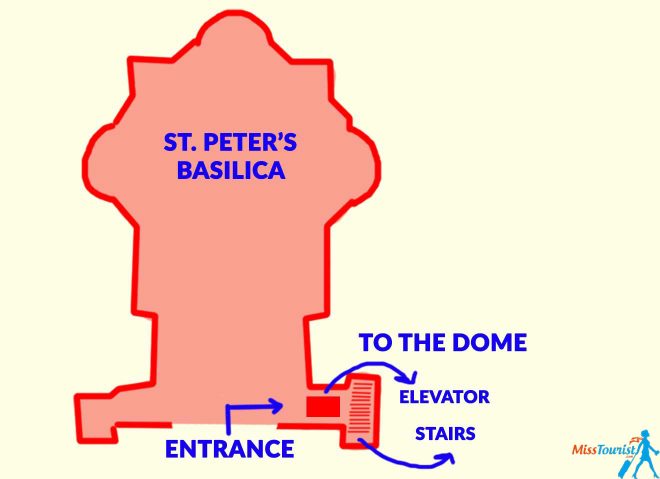 HOW TO GET TO THE TOP: In order to get to the top of the Dome, you must first enter the church and take a right after the security check area. From there, you will see clear signs that will lead you to the ticket kiosk for the Dome.

How many steps are to the top of the Vatican Dome? 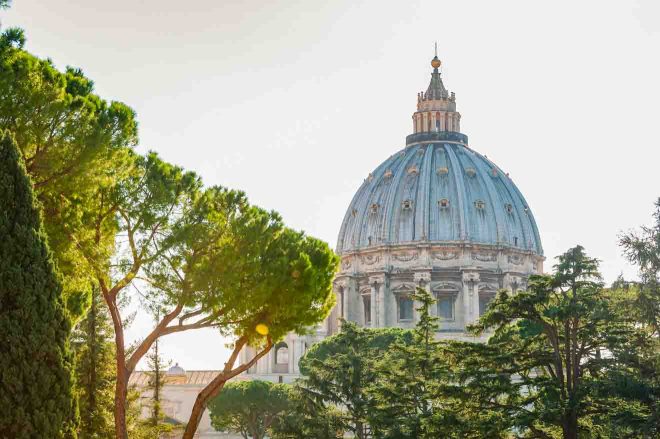 There are two options for climbing the Dome: you can either choose to climb 551 steps from the base to the top, or you can take an elevator to the first floor and then proceed to climb the 320 steps left. Then you will have arrived to the top of San Pietro in Rome!

How long does it take to climb St Peter’s Dome?

The climb to the top of the dome can take approximately 15-20 minutes. Some people may be a little faster and others slower but it is important to climb at your own pace. There is no reason to rush! Afterwards, the way back down is, of course, faster.

When is the best time to visit the Basilica and the Dome?

As I mentioned above, climbing the Dome as early as possible in the morning will help you avoid the long lines!

As for the weather, I think the best time to visit Rome is from May until the end of September when the weather is not too warm but not too cold either, it’s just perfect!

Is there a specific dress code?

Like many other churches, Saint Peter’s Basilica has a very strict dress code as well. Your shoulders and knees must be covered in order to be allowed to enter the church. If you want to wear a dress or a skirt, its length shouldn’t be shorter than your knees and your shoulders should be covered as well. Men must wear long trousers or jeans. If it’s too hot and you want to wear short sleeves, I advise bringing a summer scarf with you. There are also people selling scarves outside the Basilica, but they are waaay overpriced! 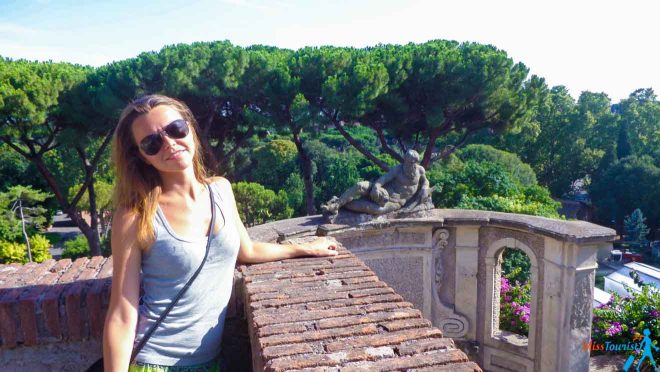 A visit to the wonderful city of Rome will be incomplete without visiting St. Peter’s Basilica and climbing its beautiful Dome to admire the entire Vatican City!

Even if the lines at the entrance are usually long, don’t be discouraged, as I have given you two great solutions that will help you avoid the crowds at the Dome in Rome! If you follow my secret tips, you will be able to enjoy the beautiful view from the top without wasting your precious vacation time standing in line!

In case you need further help planning your itinerary for Rome, here you can find all my articles about this wonderful city.

I hope my tips will be useful to you and will save you precious vacation time!

As usual, if you have any questions, don’t hesitate to ask. Write me a comment and I will do my best to get back to you.

Have a wonderful trip to Rome! 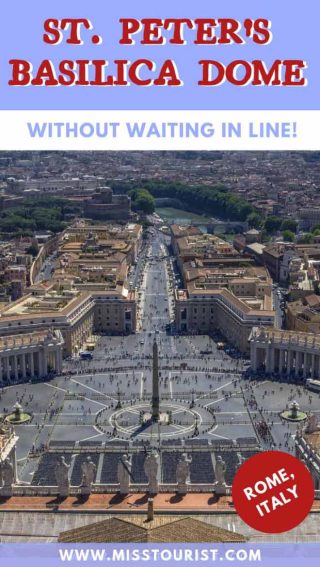